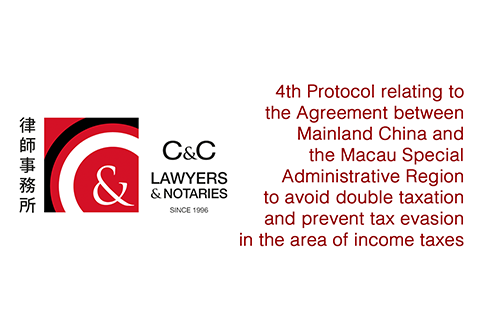 On February 19, 2020, the “4th Protocol relating to the Agreement between Mainland China and the Macau Special Administrative Region to avoid double taxation and prevent tax evasion in the area of income taxes” has been published. This Agreement aims to reinforce bilateral tax cooperation and eliminate double taxation over income while avoiding tax evasion. These adjustments result from the need to continue strengthening the economic relations between Macau and Mainland China, further reinforcing the integration of Macau in the Greater Bay Area project.

Out of all the amendments made to the Agreement, the most relevant are as follows:

– Whenever an entity is simultaneously resident in both Mainland China and Macau, the competent authorities shall together determine, through an amicable agreement, the place where such entity is deemed a resident for the purposes of the Agreement. That shall be determined by considering factors such as the place where management takes place, the place where the entity was incorporated or established and any other relevant factors. In case the authorities can’t reach an agreement, the entity won’t be able to benefit from the exemptions resulting from the application of the Agreement, except with and under the terms defined by the authorities’ mutual Agreement.

– When a person acts on behalf of an entity by frequently signing contracts, transferring ownership, granting company rights or for the provision of services in the territory of a Party to the Agreement, such entity is deemed to have a permanent establishment therein. This excludes independent agents acting for themselves and other particular circumstances related to properties.

– An individual or an entity is considered closely related to a company when they own, directly or indirectly, more than 50% of the issued shares or voting rights in such company. Moreover, capital gains of share transfers can be taxed in a Party to the Agreement if, during the three years prior the transfer of shares, the total value of such shares transferred or to be transferred results in more than 50% from immovable property located in that Party to the Agreement.

– Finally, investments made by the Macau Government in Mainland China or vice-versa in cooperation with the local government or authorities, are exempted from taxation. These funds are specifically targeted for the cooperation and development of Guangdong and Macau, which includes the income from Mainland China and Macau’s cooperative efforts.

These changes apply to income obtained from January 1 2020. For specific advice on how this Agreement can apply to your specific case, make sure to contact an informed lawyer.